ONITSHA KINGDOM
PROFILE OF THE 21st OBI OF ONITSHA 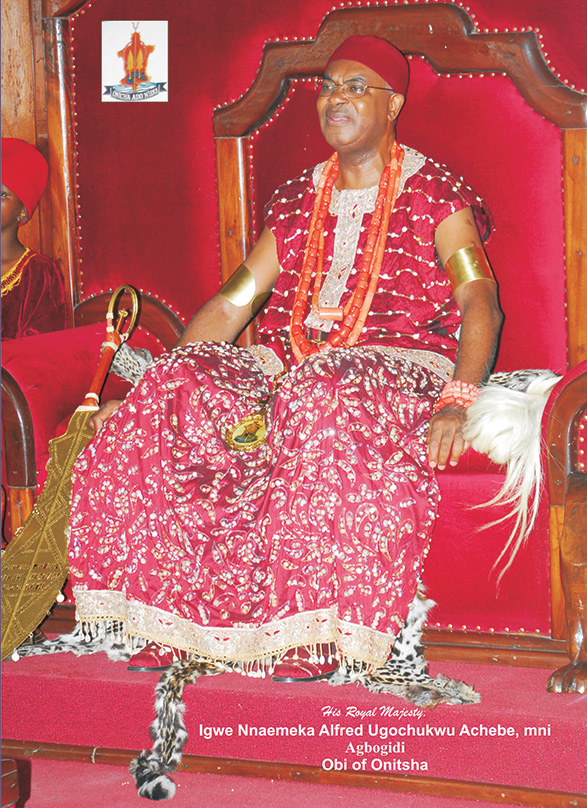 His Royal Majesty, Igwe (Dr.) Nnaemeka Alfred Ugochukwu Achebe, mni was born in Onitsha on May 14, 1941, the first child of Akunne Anthony Chinwuba and Chukwuebuka Winifred Ogbenyeanu Achebe. He is a direct and unblemished descendant of Ezearoli, through the lineage of Chimedie, Oreze Obi and Aguzani. His mother hails from Umu Olisa in Odoje, whilst his wife, Chinwe Ngozi (Nee Ononye) is from Umu Osodi, Inosi Onira of Ogbeabu. His paternal grandmother is from Umu Onuma of Obikporo whilst his maternal grandmother hails from the royal Omozele lineage of Umu Ezearoli.

The Onitsha Monarch has had a sound preparation for life through his education. With excellent result from his primary and secondary school, he gained admission in1963 to the prestigious and world famous Stanford University in California, United State of America (USA), where he took a Bachelor degree in Chemistry. This was followed with a Master degree in Business Administration in the equally famous Columbia University in New York, also in USA. He continued to develop his skills and abilities through the opportunity of many local and oversea in-service training programmes during his entire career. His educational attainment was crowned when he was nominated in 1979 to the maiden set of the Senior Executive Course of the exclusive National Institute for Policy and Strategic Studies (NIPSS) in Kuru, Jos, which is aimed at developing high-level leadership in the public and private sectors in Nigeria.

After a brief working experience in the USA during the period of the civil war, Igwe Achebe returned to Nigeria in 1972 to begin a long and fulfilled career with the Shell Petroleum Development Company of Nigeria. Over a period of 30 years, he held positions in several strategic functions, including Human Resources, Operations, External Relations, General Management and International Representation/Reputation Management.

Igwe Achebe demonstrated very early the potential to rise to senior levels in the global Shell Group of companies and was appointed to the Board of Directors of Shell Nigeria barely nine years after joining the company. This was a record achievement that has remained unequalled in the company. His other achievements include the management of the Eastern Division of the company with responsibility for hundreds of millions of dollars and the production of one-quarter of the nation’s oil output (500,000 barrels per day).

As Head of Human Resources Development, he set a manpower planning and development system that gave young but competent Nigerians the opportunity to rise fast to commanding positions in the company. The system is still in place and provides for up 200 Nigeria Staff of Shell Nigeria to be on overseas posting with other Shell Companies at any given time. It is gratifying that several Onitsha indigenes have benefited from the scheme.

As the pioneer General Manager and Executive Director for External Relations, Igwe Nnaemeka Achebe set up the policy and framework for relationships with external stakeholders, particularly in oil producing communities of the Niger Delta. His undoubted vision and foresight made it possible for the company’s expenditure on community development to grow from $12 million in 1991 to over $40 million when he left the position in 1996, and some over $60 million today.

On reaching the normal retirement age of 55 years in 1996, the company requested Igwe Achebe to continue to provide his invaluable experience and expertise to the organization by a special arrangement. He was transferred to Shell International in London, where he effectively acted as “ambassador at large” for Shell Nigeria with the title of Senior Corporate Adviser until his coronation as Obi of Onitsha. This position brought him in close working contact with international figure in politics, business, the academia and civil society. He has travelled and lectured widely, including universities and professional organizations, and featured on international electronics and in print media, including CNN, BBC and Reuters.

In Nigeria, he has over the years, by personal development and through his professional and other connections, nurtured effective access within the highest levels of government, the public service, and the private sector. His Membership of the Alumni Association of the National Institute for Policy and Strategic Studies (NIPSS) with such fellow Members as General Ibrahim Babangida, a former Military Head of State and Commander-in-Chief of the Armed Forces, Federal Republic of Nigeria has been invaluable in this regard. In particular, he has acquired an impeccable knowledge of the oil industry and the role of petroleum in the political, economy, and social dynamics of Nigeria and the world at large.

Among the other marks of Igwe Achebe’s achievements in Shell Nigeria was the fact that his career included three overseas working assignments, a situation which was earned only by competitive merit within the world-wide Shell Organization. He was the first Nigeria to earn this distinction, which remains rare in the organization. Besides his long tenure as Director of Shell Nigeria, Igwe Achebe was a Director of seven other Shell Companies during his career including the Chairmanship, Board of Shell Sierra-Leone. During 1985 to 1987, Area Business Coordinator in Shell International Limited, he supervised the Shell Group’s businesses in Angola, Ghana, Sierra-Leone, Liberia and Gambia as well as the National Oil and Chemical Marketing Company in Nigeria.

Besides Shell, Igwe Achebe has held Directorships in other Organizations including the Petroleum Training Institute, Effunrun, Warri, and the Nigerian Employers’ Consultative Association. He belongs to a string of social, professional and voluntary (non-profit) Organizations in Nigeria and overseas where he has made invaluable contributions in various capacities, even as he also found them as opportunities for continued learning and self-development.

On the home front, Igwe Achebe has always proved himself to be a thorough Onitsha indigene at every opportunity, notwithstanding his international career. He visited Onitsha regularly and participated actively in matters affecting his homeland. He has sound grasp of Onitsha tradition, culture, history, politics and governance, both written and oral. He acquired much of this by learning from his late father and other elders, including maternal relatives. In addition, he is modestly aware that there is never a limit to knowledge and thus always shares views with other leaders of thought in the community on an on-going basis.

A shining morale example, Igwe Achebe’s deep love for the tradition and culture of his homeland is demonstrated by his Membership of many socio-cultural groups. He is a Member of the ‘Ifenkili’ Age Grade Society, the Onitsha Improvement Union branches in Lagos and the United Kingdom and the ‘Umu Ezearoli’ Welfare Association in Lagos. He was initiated into the prestigious ‘Agbalanze Onitsha’ in April, 1996 with the cognomen, ‘Nnanyelugo’ and thereafter acquired the status of ‘Ugonabo’, when his eldest son took the Ozo title. He was a Member in good standing of the branches of ‘Agbalanze Onitsha’ in Lagos and the United Kingdom.