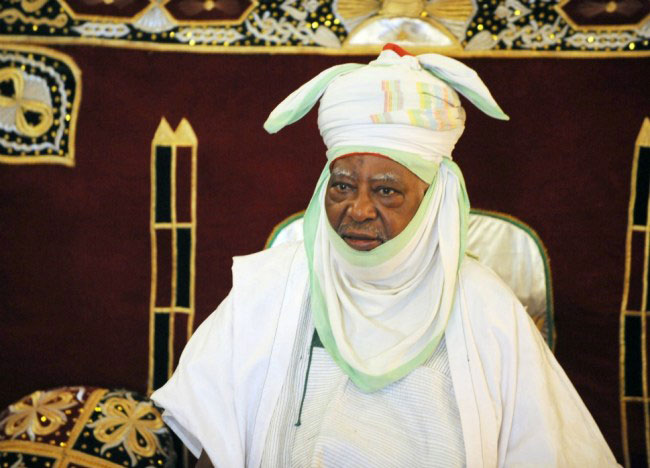 His Royal Highness, Sir, (Alhaji) Dr. Ado Bayero, CFR, LLD, JP was born on July 25, 1930 in Kano. He was Emir of Kano for 51 solid years having ascended the throne of his forebears in 1963 (succeeding His Royal Highness, Alhaji Muhammadu Inuwa) until his demise on June 6, 2014 at age 84. He was the son of His Royal Highness, Alhaji Abdullahi Bayero Dan Muhammad Abbas, a past Emir of Kano who reigned for 27 years. Bayero was a former Nigerian Ambassador to Senegal and the 13th Fulani Emir since the Fulani war of Uthman Dan Fodio when the ancient Hausa Kingdom was captured by the Jihadists as well as the 56th ruler of the ancient city…

The late Monarch to date is the longest serving Emir in the history of Kano Emirate. His reign occasioned the radical transformation of the Emirate from a Native Authority (NA) to Community Leadership. He was a prominent spiritual and community leader in Northern Nigeria and his palace played host to official visits by many government personnel and even strangers while he has sometimes played advisory roles in many governments.

However in 1981, the Governor of Kano State, His Excellency, Alhaji Abubakar Rimi of blessed memory restricted traditional homage paid by District Heads from the State to the Monarch and also excised some domains out of his Emirate. And by 1984, a ban was placed on the Emir and his bossom friend, His Imperial Majesty, Kabiyesi Alayeluwa, Oba (Dr.) Okunade Sijuwade, Olubuse II, the immediate past Ooni of Ife of blessed memory.

A community leader of no mean standing, Emir Bayero’s support and consultations was amongst the few within traditional leaderships in Nigeria highly sought after at various times and at nearly every point throughout Nigeria’s military rule even though many military regimes in the past also chipped away at powers of traditional rulers, his inclusive.

An Emir of an Emirate that is sometimes the epicenter of turbulence, Bayero was an authority in peace and conflict resolution as well as a detribalized bridge builder and father to all. At various times, he was Chancellor, University of Ibadan and University of Nigeria, Nsukka.

The Kano Monarch was a rare royal breed, suave and foremost Traditional Ruler sometimes identified by a distinct turban (Rawani), hooded cloak and a gown ensemble (Riga) while the displays of his horsemen are known for the enwrapped attention it garnered from attentive audience. A complimentary praise appellation by Hausa singer, Maizargardi extolled Bayero’s heritage and wealth and binds it with the responsibility of sharing the wealth with the people. He is also referenced as Dan Abdullahi Bayero and Jikan Abbas.

Emir Bayero was born to the family of Emir Abdullahi Bayero Dan Muhammad Abbas and Hajiya Hasiya into a Fulani Sullubawa Clan that has ruled over the Emirate of Kano since 1819. He was the 11th child of his father and the 2nd of his mother. At age 7, he was sent to live with Maikano Zagi and started his education within the Emir’s wall in Kano studying Islam. He then followed religious instructions with attendance at the Kano Middle School where he was classmates with Mahmoud Gashash.

He graduated from the School of Arabic Studies in 1947 and attended Zaria Clerical College in 1952.

Upon his graduation from School of Arabic Studies, he took up work with the Bank of British West Africa where he was until 1949, the year he joined the Kano Native Authority.

At the bank, he was exposed to colleagues from different cultural and traditional background and he was able to see the developing Nigerian State from his seat as a bank clerk. In 1954, he won a seat to the Northern Regional House of Assembly. He was the Head of the Kano Native Authority Police Division in 1957 until 1962 before becoming the Ambassador of Nigeria to Senegal. As Police boss, he tried to minimize the practice of briefly detaining individuals or political opponents on the orders of powerful individuals in Kano.

As an Ambassador in Senegal, he activated a relationship with the Senegalese President Senghor in whose country like Northern Nigeria, Tijjaniyya leader, Ibrahim Niass had numerous followers. Also while working as an Ambassador, he enrolled in a French class to learn the language.

In 1963, he succeeded Muhammadu Inuwa as Emir of Kano with the support of kingsmakers; Shehu Ahmadu, Madaki, Bello Dandago, Sarkin Dawaki, Bello Barwa and Mohammed Muhtari Sarkin Bai who liked his short experience in politics.

Bayero ascended the throne of his forebears as Emir during the First Republic and at a time the nation went through rapid social, political changes and as regional, sub-regional and ethnic harmony became more dissenting.

In his first few years, two political movements with a pro-Kano stance gained support among some of Kano elites. The first, Kano People’s Party emerged during the reign of his predecessor, Emir Muhammadu Inuwa and supported the deposed Emir Sanusi but it soon evaporated. A new one, the Kano State Movement emerged towards the end of 1965, favouring more economic sovereignty for Kano Province.

The Movement had Dandago, Maitama Sule and Inuwa Wada as members. The death of many political activists of the period from Northern Nigeria in 1966 and subsequent enthronement of a unitary state consolidated a united front in the Northern Region but also resulted in a spate of crisis and violence in the North including Kano.

Emir Bayero has been highly and widely commended on his role at bringing calm and stability during the time of the crisis and subsequent ones in Kano.

As Emir, he became a patron of Islamic scholarship and embraced western education as a means to succeed in a modern Nigeria.

However in his reign, the constitutional powers derived as Emir was sculpted down by the military regimes between 1966 and 1979. The Native Authority Police and Prisons Department were obliterated. The Emir Judicial Council was relegated by another body while Local Government Reforms carried out in 1968, 1972 and 1976 reduced the powers of the Emir.

During the Second Republic, the Emir witnessed hostilities from the People’s Redemption Party-led government of His Excellency, Ahaji Abubakar Rimi, the then Governor of Kano State. In 2002, Emir Bayero led a Kano Elders Forum in opposing the Onshore and Offshore Abrogation Bill.

Emir Bayero’s 51 years on the throne of his forebears witnessed the systematic change of Kano to a political, cultural and commercial hub in the West African sub-region. The dramatic spring of Kano to an inselberg of development is not unrelated with the dogged commitment of the Emir to issues of development, equity and unity.