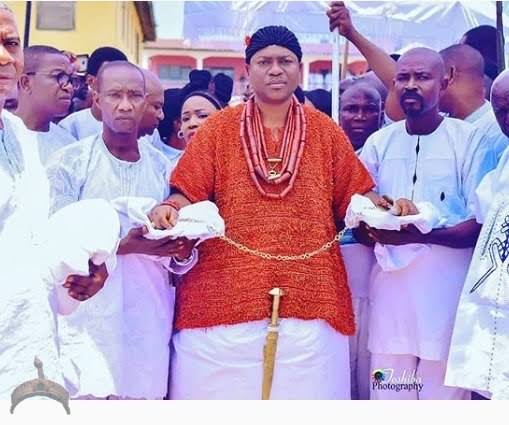 Igogo festival dates back to between 1340 and 1356 A.D. and was founded by Olowo Renrengenjen who reigned in Owo kingdom between the same periods. It was at first called Oronsen festival because it was built around the annual sacrifice demanded by Yeye Oronsen, a princess of Afo who married Olowo Renrengenjen at Okiti Asegbo.

Yeye Oronsen was a very quiet and beautiful princess who got the attention of Olowo Renrengenjen much more than any of his wives. His concern for Yeye Oronsen however excited jealousy from his other wives.

Yeye Oronsen’s father told the Olowo of 3 taboos which she observed: A head load of firewood was not to be thrown down in her presence; Water was not to be spilt before her and she should not hear the sound of the grinding of okro on a grinding stone. As such Yeye Oronsen was given a a special quarters in the palace and a maid to ensure the taboos were not broken.

Shortly afterwards, Olowo Renrengenjen went out to war. No sooner he was gone, Yeye Oluwa, his senior wife called together the other wives to a meeting to get rid of Yeye Oronsen and to find out what the taboos were. She later bought the necessary information from Yeye Oronsen’s maid for a meal of mashed yam and together with the other wives connived to break the taboos and immediately sent for Yeye Oronsen.

On Yeye Oronsen’s arrival, the other wives broke the 3 taboos thus compelling Yeye Oronsen to flee the palace.

She fled the palace to Olisagho’s house where she stopped and beat her palm on the wall of the house to bid him goodbye.

Unknown to her, her ring slipped off her finger and fell on the ground. She continued through Igbo Ogwata where she dropped her hair-pin and went a bit further to stop and rest.

On Olowo Renrengenjen’s return, he immediately sent one Isegbe meso (a group of 81 men) to search for Yeye Oronsen to no avail. Another Isegbe meso were again sent out. The party found her ring and her hair-pin. As they approached the place Yeye Oronsen was resting, she heard their footstep and fled further leaving her head-tie behind which was picked by a brother of the Olowo. Yeye Oronsen was later found at Igbo Oluwa but for the fact that it is forbidden to touch an Olowo’s wife, she was pleaded with to return home.

As a condition for her return, Yeye Oronsen demanded from the Olowo the head of Yeye Oluwa and insisted having it before returning back to the palace. Her demand was too costly as Yeye Oluwa occupied a very important position as Olowo’s senior wife and the Matriarch of the Royal Court of Owo. A substitute (head) was sent to her. In anger and disappointment, she demanded a similar sacrifice yearly if Owo kingdom was to have peace and plenty. Thereafter, she disappeared into thin air for she possesses supernatural powers.

This tragic episode happened during the festival of new yam celebrated amidst drumming and dancing. The Olowo was plunged into mourning and thus banned the beating of drums. In place of drums, metal gongs (agogo or igogo) were used and the festival became known as Igogo festival. The title of ‘Alaja’ (oja means head-tie) was given to Olowo’s brother who found Oronsen’s head-tie and he was ordained priest of Igogo festival while the place the head-tie was found became known as Ul’aja (Uluoja).

The duration of Igogo festival is 17 days beginning with the Ighoroli ceremony which is performed on Ugbegu market day. The Ighare are usually dressed in their traditional white loincloth tied round their waist with parrot’s red tail feathers stacked into their hair over their foreheads; the Iloro Chiefs and the Edibo Aleli (domestic Chiefs) assemble at the Ugha Eduma (a meeting hall in the palace). Greetings are made to the gathering by Chief Osowe of Ehin-Ogbe who is one of the stewards to each of the title Chiefs ushering in on behalf of the Olowo the Igogo festival. Thereafter the members of the Ighare in order of seniority pay homage to the Olowo who in turn presents to them through the stewards; Chief Ajana and Osowe, 24 kola nuts in a special bowl made of lead and a calabash of palm wine for use in a sacrifice.

Five days later another Ighoroli is performed and the Olowo only serves out palm wine. This is followed by the Uyena, the clearing of a path supposed to have been taken by Yeye Oronsen during her flight. The Olowo pays 28 kola nuts for the clearing out of which the Ugbama dressed in a pair of trouser and head-wear of calabash bowl formerly painted white but today with aluminum paint gets 4. The Ugbama carry long canes to serve as corrective measures to anyone who tries to break the festival taboo by wearing either head-tie or cap. Each Ugbama ties a piece of cloth reaching the knees over his trousers and carries horn or pieces of iron gongs which he knocks together. The Ighare owns the remaining twenty-four kola nuts while palm wine is served at Ugha Eduma.

This is strictly followed by the Uyanna five days after. The Alaja and the Ighare gather at the Ugha Alamuren at about 4 0 clock in the evening. The Olowo arrives attended to by the Edibo Olowo and dressed in a white robe lightly decorated with beads and in his hair is stacked a number of parrot feather. He then presents a sacrificial sheep to the Ugbama through the stewards who are dancing and singing, ‘Ema mu wa, aye o yo e’ until they receive the sheep (which has since replaced the human victim) and lead it to the Oronsen groove where it will be sacrificed.

Four days later, the Ugbate ceremony is performed at about 6 o clock in the evening. All the women traditionally vested with the power of selling meat come to Oja Oba (Oba’s market) carrying their trade baskets containing knives and pieces of iron. They have come to watch the Onugho (sacrificial sheep) being led round the palace walls. These women are dressed in white. Tied round the sheep’s belly is a strip of white cloth woven by a woman. The sheep is lead round the palace 3 times by the Ugbamas singing and dancing, ‘Atipa a bale a toju de o, onugho gban re o’. The sheep is then led to Ul’aja the spot Yeye Oronsen left her head-tie. There they keep an all-night vigil.

On the 17th day, all the Chiefs dance round the town on their way to Olowo palace. Music played is beaten only on metal gongs. At the palace, the Olowo distributes to the priests sacrificial animals for the various sacrifices which includes 1 he-goat, 1 dog, 7 goats and 36 kola nuts.

The Olowo who is now dressed in white loincloths richly adorned with beads with his Chiefs together dance to the Igogo music.

In the course of the presentation, the Osowe or Ajana recites the following incantations on behalf of the Olowo at Ugha Alamuren:

After the incantation, the Ajana or Osowe prays for the Olowo and his subjects. Thereafter for 7 days, maiden dance round the town and young men engage in wrestling contests.

One day after the recital of the incantation, the Iloro dance to the palace. The Olowo may dance round the town with the attendance of the Iloro and Owo Chiefs or remain in the palace to attend to visitors.

Later in the day (evening), a priest called Uru comes to Owo from Emure-Ile of 6 miles to perform some traditional rites at Ugha Alamuren in the process of which Chief Osowe or Ajana recites on behalf of the Olowo the last 25 lines of the incantations he recited a day before. At the end, the Uru recites incantations striking 2 bullhorns at interval.

After 6 days of Uru’s visit, all the priests gather at Olowo’s palace at about 10 am in the morning and assemble at Ugha Okunrin where the Olowo presents to them 24 kola nuts.

After dancing to a tune each on the gongs, homage is paid to the Olowo while Obajo, one of the priests hold up a horse tail whisk and say; ‘Ode o de o, Aghoro mama se ‘jo oro’. And all the priests (Obata, Alaja and Olisagho) recite 3 times the same in unison before leaving the palace.

Thereafter, the Olowo goes to Oke Agbala, a hall within the palace to meet the Egwi, the priest to who belongs the head of the sheep used in the sacrifice. The Egwi sees the Olowo once in a year and only at the Igogo festival. The Olowo presents him with 1 goat, 6 yards of cloth and 4 kola nuts. Then the Olori (Olowo’s wife or wives) also known as Yeye or Ayaba dressed in white dance round the palace and parts of the town and pay homage to the Olowo on their return.

As the day runs out, Olowo’s servants beat a drum at Oke Ugha to notify the town that the festival is over as well as lift the ban on drumming.

Thus, Igogo festival comes to an end until the following year.

Igogo festival is an appeasement and mark of respect for Yeye Oronsen, an Afo princess married to Olowo Renrengenjen at Okiti Asegbo. The festival which dates back to between 1340 and 1356 AD was at first known as Oronsen festival because it was built around an annual sacrifice demanded by Yeye Oronsen whose 3 taboos which she observed were broken resulting to her fleeing the palace in anger and disappointment.

The tragic episode happened during the festival of new yam and thus threw the Olowo and his subjects into a period of mourning leading to the ban on the beating of drums and its replacement by that of iron gongs.

Igogo festival holds a very important cultural milestone because it tries to reflect the flight of Yeye Oronsen depicted in the performance of the Uyena ceremony, which is the clearing of a path supposed to have been taken by her during the said period before her disappearance into thin air because she possesses supernatural powers.

The 17 days festival is also an annual circle during which the Olowo as the overall spiritual head of Owo kingdom and his subjects appease the spirit of Yeye Oronsen on her very costly demand of the head of Yeye Oluwa (Olowo Renrengenjen’s senior wife) and Matriarch of the Royal Court of Owo as it was then by offering a similar sacrifice for Owo to have peace and plenty. The presentation of Onugho, the sacrificial sheep (Which has since replaced the human victim) during the Uyanna ceremony and its ultimate sacrifice at the Oronsen groove is seen as an atonement for the misdeed of his subjects.

In modern times, the festival is a remarkable occasion because it affords the Olowo who rarely appears in public to present himself to his subjects who in turn re-unite and re-affirm their allegiance and obligation to his sovereignty. 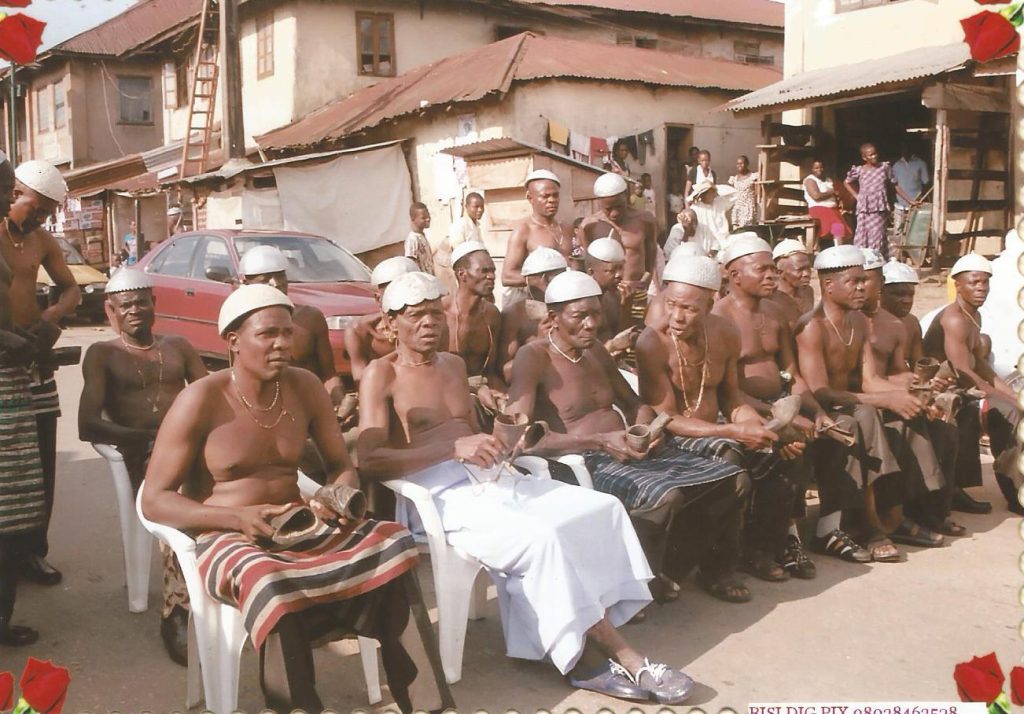 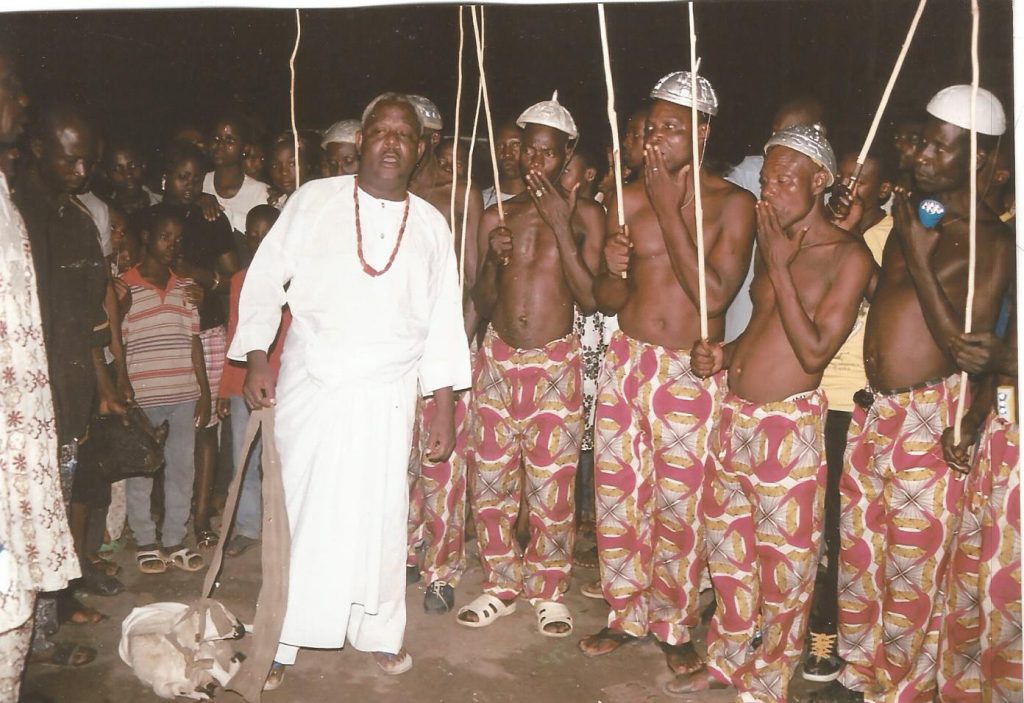 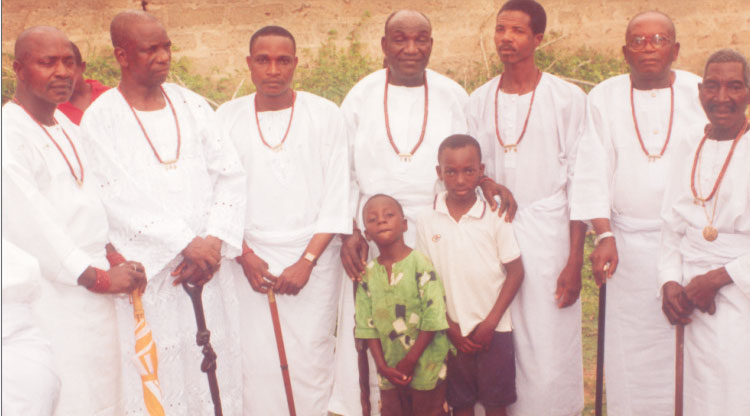 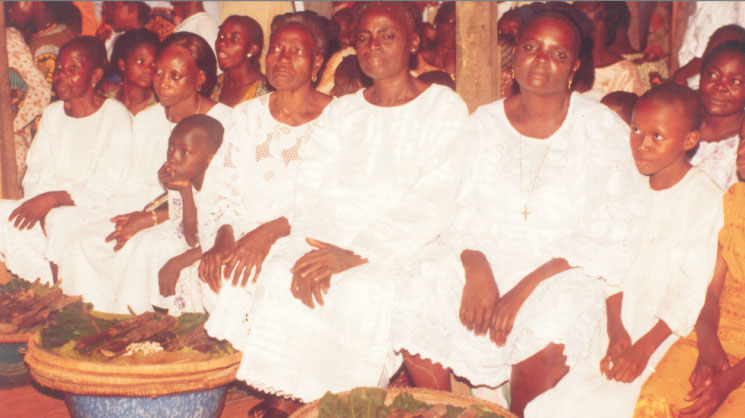 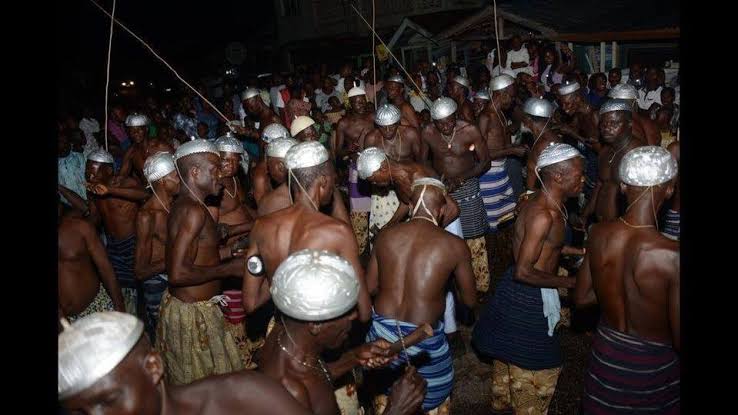 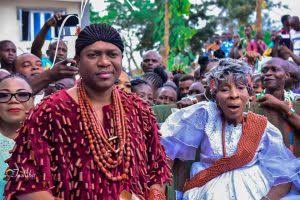 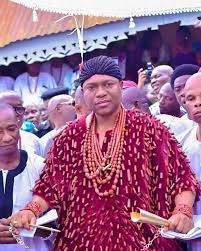 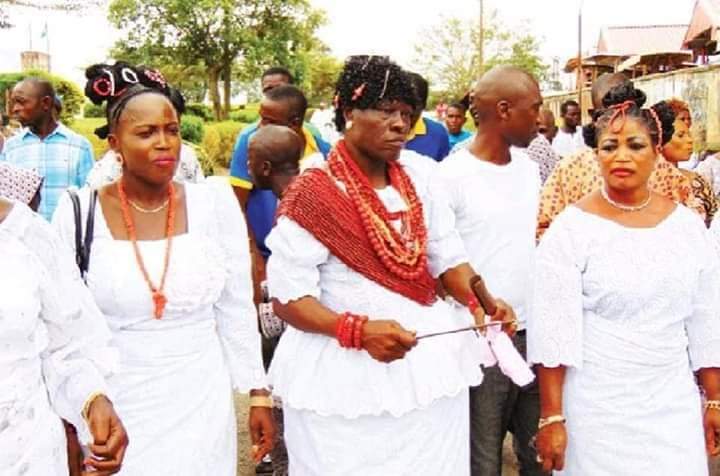 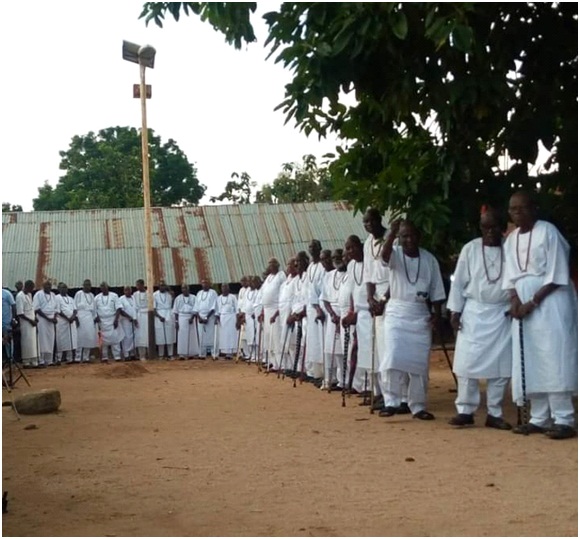