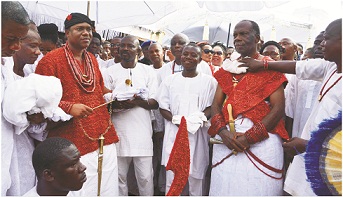 His Royal Majesty, Kabiyesi Alayeluwa, Oba (Dr.) Ajibade Gbadegesin Ogunoye III, Olowo of Owo and Paramount Ruler of Owo Kingdom presides over the Royal Council meetings called, ‘Ugbima Aleli’ which is made up of revered traditional High and titled Chiefs and village Heads of surrounding towns and villages.

The Ugbima Aleli is held every nine days (Isisan) to settle disputes, deliberate on the socio-economic development of Owo and also recommend Chieftaincy titles to whosoever deserves it.

Olowo’s Royal Courts popularly referred to as Aghofen Olowo is the seat of power in Owo Kingdom from time immemorial and has housed the Olowo who is regarded by his subjects as a semi-divine king, second in rank to Orisa (supreme god) both residentially and officially.

The Monarch’s selection is by divination and announced through the kingsmakers while an Olowo must come from the sons of past Olowos (Omo Ologhos). After which the Iloro chiefs consisting of senior chiefs collectively known as Ighare under the leadership of Chief Akowa loja and others collectively known as Ugbama play significant roles in the installation.

The installation and coronation lasts for about 3 months and involves lengthy traditional rites which distinct the king from the ordinary. As such, the king lives in ordained ceremonial and secluded areas of the palace and rarely appears in public except on ceremonial outings. The Olowo is approached only with reverence and regarded as the fountain of justice and source of honour by his people.

Olowo’s palace is perhaps the largest in the entire Yoruba nation spreading across 99 hectares of land. It houses over 100 ancient courtyards out of which 17 remain untampered till date. These include: Ugha Okonren, Eyinode, Akomaduse, Eduma, Ugha Okegha, Inoli, Ugha Oke (Uli Ade), Odouli, Oke-Agwe, Ugha Oluwa, Ugha Moron and Ugankun amongst others. The disappearance of most of these courtyards is as a result of disintegration and facelift of sections of the Royal Court. However Palace historians still recognizes the sites where traditional ceremonies are performed as well as for other needs.

On these 25 years, Olowo (Sir.) Olateru Olagbegi II was on suspension order. After the demise of Olowo Adekola Ogunoye II in 1993, the Ondo State Government under His Excellency, Evangelist Bamidele Ishola Olumilua revoked the suspension order and re-installed Olowo (Sir.), Olateru Olagbegi II back to the throne of his ancestors to complete his assignment in the world.